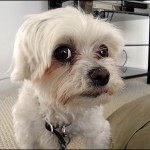 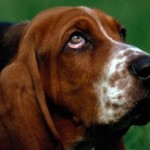 Every week I hear this sentence from someone who has phoned me in desperation for help with their dog:  “Rover has been (fill in the blank… chewing, digging, peeing) when we are not home. He knows he’s been naughty, he is always guilty when we show it to him, but he just doesn’t learn, he is (fill in the blank…willful, stupid, badly bred, dominant, a bad dog)”

Let’s look at this from your dog’s perspective. When faced with an aggressive human (or dog) a dog has only two choices: give up or fight back. When a dog behaves submissively their ears go back, they don’t want to make eye contact, they try to run away, they roll on their bellies, etc. A dog trying to be as submissive as possible does not mean he’s admitting guilt; he’s just doing what any dog would do when someone is behaving aggressively towards him. Think about it, his only other option would be to try and defend himself.

One of the worst things I hear from clients is that ‘the dog won’t come to me when I want to show him where he has been naughty, that’s how I know he’s guilty’.  No dog will want to come near you when he can see you are furious. You are telling the dog ‘come here’ and ‘stay away from me’ at the same time. If they follow your instructions they will get into trouble for listening to you, what is the sense in that? That is no way to foster a relationship where your dog can trust you.  No sane dog would run toward an aggressive, snarly dog.

Please don’t actually do this, but imagine the following: you point at a chair that has not been touched by your dog, but you act in exactly the same manner as you would if your dog had chewed it to bits; you point, you shout, you say ‘bad dog Rover’, you rub your dog’s nose in it, bring their face close to the chair and give them a smack with a belt, you put their mouth on the chair and scream “NO!!!!” in their ear (I’m not making this up, all of these thing have been reported to me by clients as their best attempt to ‘teach’ their dog not to chew.) If you were to get angry about an un-chewed couch your dog will act no different than if the couch had been chewed!

The sad truth is dogs tend to chew on items that smell like the people they like, this is why dogs generally will chew on your favourite couch, not the one in the spare bedroom (although there are exceptions to this). To chew on your smell is a comforting thing for a dog, so when they chew on the shoes you wore out last night to the movies this is not to get back at you for having gone to the movies (far too complicated for dog’s thinking, really) its because they are the freshly worn shoes that have your sweat in them! Dirty clothes, cell phones, glasses, remote controls, etc. also all smell like us because we touch them all the time and often are prime chewing targets!

Also, you shouldn’t punish your dogs after they have chewed something because punishing after the act tends to make it worse. Dogs can become so stressed at the thought of their owners coming home that they will chew or dig more to get rid of stress. This is a sad, vicious cycle I see far too often in my work.

Here is an example from one of my clients: A woman (who I will call Sally) phoned me to say her two Jack Russell Terriers were destroying her furniture. I arrived early to our appointment before Sally and her housekeeper let me in.  The two dogs were snoozing in their beds when I arrived. When we heard Sally’s car pull up outside both dogs scooted under the couch and hid. When Sally came into the living room she pointed under the couch and said, somewhat triumphantly, ‘you see, look at them, they know they are so naughty, they’ve been chewing the couch again, that’s why they are hiding.’ I told her no, in fact the dogs had been sleeping soundly when I came, but when they knew Sally was coming in the door they hid since her coming home is now a scary event for the dogs.  Sally stopped her dogs from chewing by acting relaxed and happy whenever she got home and by giving them two walks a day, before and after work. The reason the dogs started chewing the couch in the first place was that they were simply bored and not getting enough exercise.

Guilty dogs are a myth. Dogs really are simple creatures. They respond to our moods because what else can they do?

Remember, if you want a good dog you have to be a good owner! 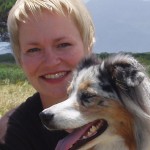 View all posts by Rogz →

4 Responses to “The Myth of the Guilty Dog”